On the 14th September 2001, the FBI named "Abdulaziz Alomari" as a suspect in the hijacking of American Airlines. They included very brief details about him, but no photograph as of yet:

However, within a few days there were questions about this identification, which even today are used as evidence that al-Omari is "still alive". One commonly quoted story comes from the BBC, released on September 23rd:

Abdulaziz Al Omari, another of the Flight 11 hijack suspects, has also been quoted in Arab news reports. He says he is an engineer with Saudi Telecoms, and that he lost his passport while studying in Denver.

Another man with exactly the same name surfaced on the pages of the English-language Arab News.

Two people claiming to be al-Omari proves only that there was confusion over names. At least one of them must be wrong: why not both? To demonstrate the point, the BBC use a photo that's clearly of a different individual.

There is more to the story, however. Here's an interview the "still alive" al-Omari conducted with UK newspaper the Daily Telegraph:

The Saudi Airlines pilot, Saeed Al-Ghamdi, 25, and Abdulaziz Al-Omari, an engineer from Riyadh, are furious that the hijackers' "personal details" - including name, place, date of birth and occupation - matched their own...

Mr Al-Omari, who was accused of hijacking the American Airlines plane that smashed into the the World Trade Centre's north tower, said that he was at his desk at the Saudi telecommunications authority in Riyadh when the attacks took place.

He said: "I couldn't believe it when the FBI put me on their list. They gave my name and my date of birth, but I am not a suicide bomber. I am here. I am alive. I have no idea how to fly a plane. I had nothing to do with this."

Mr Al-Omari said his passport was stolen when his apartment in Denver, Colorado, was burgled in 1995. He had been studying engineering at Denver University since 1993. He was given a new passport in Riyadh on December 31, 1995 and returned to America to resume his studies in January 1996. After graduating last year he returned to Riyadh to join the electricity authority and later moved to the telecommunications authority.
http://www.telegraph.co.uk/news/main.jhtml?xml=/news/2001/09/23/widen23.xml

This is more useful, as he says the FBI provided both his name and birth date. Could this just be coincidence? Possibly, although as we've seen, the FBI did provide two birth dates in their first hijacker list. The other information provided suggests his birth date is most likely to be December 24, 1972, making him 20 when he first arrived at Denver University.

The problem with this is that the FBI-named Abdulaziz al-Omari always seems to use the later 1979 birth date. Here's his visa application as published in National Review, for instance. 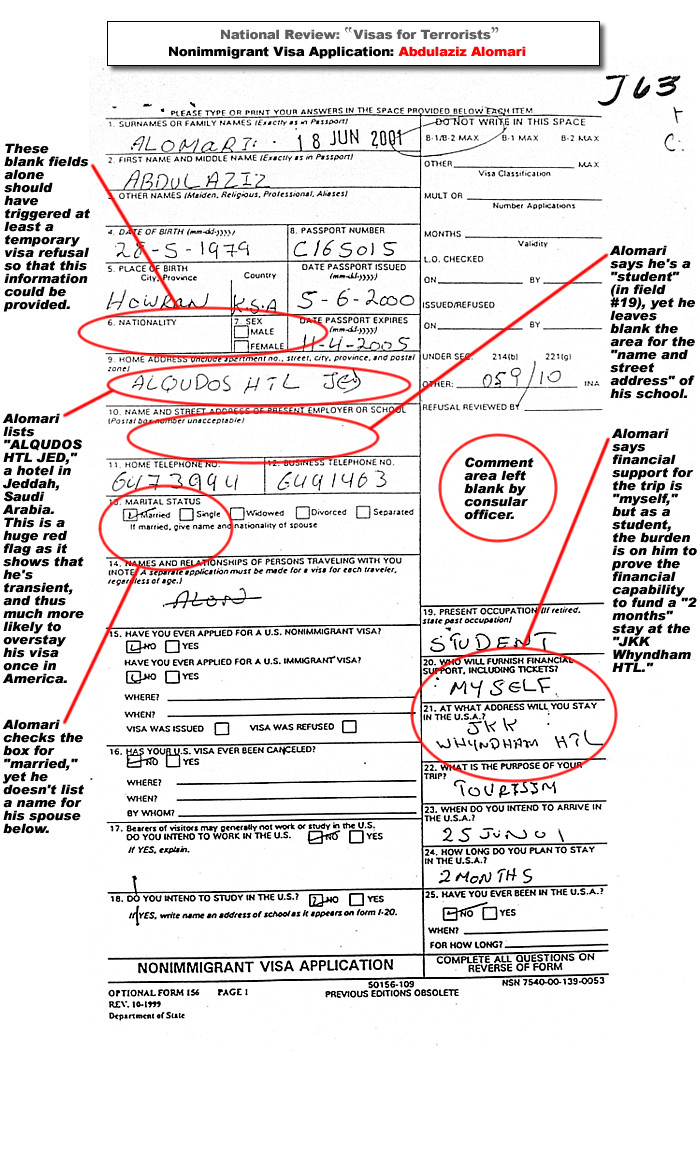 A document released to the Moussaoui trial additionally says al-Omari supported his application using Saudi Arabia passport #C165015, including a birth date of 28th May 1979. (Source)

We've yet to discover any document where the FBI al-Omari has used the 1972 birth date, in fact. Which probably isn't surprising, because although looks can be deceiving, we'd say he appears more likely to be 22 than 28. 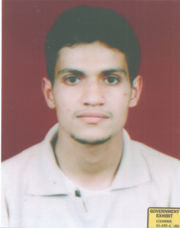 What seems to have happened here is that Abdulaziz al-Omari appeared on the Flight 11 manifest as Abdulrahman al-Omari (Abdulrahman being one of his names). The FBI have worked back through public and immigration records, looking for Abdulrahman al-Omari's, and highlighting any that might be of interest: people who left or arrived in the US at certain times, had travelled to particular places according to passport records, were associated with individuals known to the FBI, whatever it might be. In doing this they've uncovered one individual, the alleged hijacker, with his 1979 birth date. They've also pulled out another individual with a 1972 birth date, and both dates made it into the September 14th lists. He has come forward to say he wasn't involved, and that helps to make the picture clearer, but it doesn't demonstrate that there wasn't a real, younger al-Omari on Flight 11 that day.

"Just speculation"? Far from it. Here's a quote taken from a story run only five days afer the attacks:

South Florida is a choice spot for terrorists. About 60,000 people of Arab lineage live there, making it easier for Middle Eastern terrorists to blend in.

And the number of similar names in such a large population makes it more difficult for police to track the terrorists.

The FBI ran up against that problem last week in Vero Beach, where it raided what was thought to be the home of Abdulaziz Alomari but actually was the home of Abdulrahman Alomari, who apparently had nothing to do with the terrorists.
Daily News, New York, September 16 2001

The issue of mistaken identity was conceded long, long ago.

By way of confirmation, a Saudi Information Agency report offered a background on an "AbdulAziz AbdulRahman AlOmari" who they say had traveled to Afghanistan, fought with the Taliban, and was involved in the attacks:

AbdulAziz AbdulRahman AlOmari (AlZahrani) 23, married with one daughter 28 months. He was born in Hawran village at AlMakhawa County in AlBaha region (south west) one of the poorest regions in the country.

He is s a graduate of Imam Mohamed Bin Saud University, Qaseem branch, where he met and befriended several clerics such as Suliman AlAlwan who was mentioned in Osama Ben Laden’s tape. He also studied at the hand of senior official cleric Shaikh Saleh Al-Fawzan.

He left to Afghanistan in December 2000. He was trained in AlFarooq camp in Qandahar and was appointed its religious leader due to his education. During his stay in Afghanistan he joined Taliban forces in their attacks on Afghani towns, according to several of his friends.

Later he was appointed a military trainer at the same camp. He along with several hijackers left to US from Dubai. His nickname in Afghanistan was Abu AlAbbas Al-Janoubi. He was on American Airlines #11 that crashed into North Tower of World Trade Center.
http://web.archive.org/web/20031026101720/http://www.arabianews.org/english/article.cfm?qid=12&sid=6

Meanwhile Abdulrahman al-Omari, the pilot, came forward after a photo of him was shown on CNN. As you can see, he bears no resemblance to the alleged hijacker as shown in the September 27th FBI photo list.

We ran a background check on the name, which associated him with the following addresses:

The man who lived here was linked to Saudi Airlines, then. But he wasn't Abdulaziz al-Omari, who isn't recorded as living at those addresses, and was not a pilot. These are clearly two different men.

Look at the details of this story, then, and they don’t come close to proving that the al-Omari named by the FBI is still alive. And final confirmation arrived in 2002. First, when Saudi Arabia finally accepted that the named suspects were actually involved.

Saudi Arabia acknowledged for the first time that 15 of the Sept. 11 suicide hijackers were Saudi citizens...

Previously, Saudi Arabia had said the citizenship of 15 of the 19 hijackers was in doubt despite U.S. insistence they were Saudis. But Interior Minister Prince Nayef told The Associated Press that Saudi leaders were shocked to learn 15 of the hijackers were from Saudi Arabia.

"The names that we got confirmed that," Nayef said in an interview. "Their families have been notified."
http://www.usatoday.com/news/world/2002/02/06/saudi.htm

And second, when Al Jazeera played an al-Qaeda tape showing some of the hijackers, including al-Omari, who threatened the US and praised bin Laden.

DUBAI, United Arab Emirates (CNN) -- A tape purportedly of Osama bin Laden praises the al Qaeda hijackers for changing "the face of history" when they flew airliners into the World Trade Center and Pentagon last year.

"There aren't enough words to describe how great these men were and how great their deeds were," bin Laden said in an audiotape message played Monday by the Qatar-based, Arabic-language television news network Al-Jazeera.

It was not immediately clear when the tape was made, but it left no doubt that al Qaeda was behind the terror attacks that killed more than 3,000 people. In the past, al Qaeda has released tapes claiming responsibility for terror attacks, such as the October 2000 bombing of the USS Cole in Yemen, months afterward.

"When you talk about the invasion of New York and Washington, you talk about the men who changed the face of history and went against the traitors," bin Laden said on the tape. "These great men have consolidated faith in the hearts of believers and undermined the plans of the crusaders and their agents in the region."

Al-Jazeera also showed al Qaeda video of the hijackers -- all wearing turbans and having full beards, in contrast to their clean-shaven looks on the day of the attacks -- reviewing flight manuals in Kandahar, Afghanistan, and it played a video message from one of the hijackers, who implored the United States to "take your fat hands off the land of Arabs."

"We will get you. We will humiliate you. We will never stop following you," said Abdulaziz Alomari, one of the hijackers aboard American Airlines Flight 11, which flew into the north tower of the World Trade Center.

"God praise everybody who trained and helped me, namely the leader Sheikh Osama bin Laden. May God bless him. May God accept our deeds."

An image of the gutted Pentagon was superimposed behind Alomari's shoulder as he spoke -- an indication al Qaeda had made the video after the attacks...
http://archives.cnn.com/2002/WORLD/meast/09/09/binladen.tape