Jeremy Glick was one of the passengers who died when United Airlines Flight 93 crashed on 9/11.

Jeremy Glick called his wife, Lyzbeth, after Flight 93 was hijacked. The Pittsburgh Post-Gazette was one of many papers to report what happened next:

Jeremy Glick picked up a GTE Airfone just before 9:30 a.m. and called his in-laws in the Catskills. His wife, Lyz, and daughter, Emerson, were visiting. The family had been transfixed in front of a television, watching news coverage of airliners smashing into the World Trade Center in New York.

"It's bad news," Glick replied. He asked for Lyz.

Lyz recalls no background noise. No commotion. He described the men as Arabic-looking, wearing red headbands, carrying knives. One told passengers he had a bomb. Most passengers had been forced to the rear of the cabin. Glick's mother-in-law went to another phone and dialed 911. As Jeremy and Lyz spoke, New York state police patched in on the call.

Glick asked his wife: Was it true that planes had been crashed into the World Trade Center?

Yes, she said. Glick thought so. Another passenger had been on the phone home and heard the same thing...

Lyz Glick was still on the phone with Jeremy. She stood in her parents' living room while the television screen filled with the sight of two burning towers.

"You need to be strong," she said.

State police, on the other line with Glick's mother-in-law, relayed a question: Did Glick know where his plane was? Glick didn't know, but he sensed they had changed direction.

Lyz and Jeremy spoke of their love for each other.

"I need you to be happy," he told her, "and I will respect any decisions that you make."

Then he told her the passengers were taking a vote: Should they try to take back the plane?

Glick wondered what to use for a weapon. "I have my butter knife from breakfast," he joked...
http://www.post-gazette.com/headlines/20011028flt93mainstoryp7.asp

The 9-11 Commission interviewed Lyz Glick about the 9/11 call with her husband, where she made several corrections to media reports.

--Ms. Glick received a phone call from her husband Jeremy Glick while he was aboard UA93

--Ms. Glick indicated that Mr. Glick told her that he was conducting a vote among passengers about whether to storm the cockpit to retake the plane.

--Ms. Glick affirmed that Mr. Glick indeed said the he did not see any firearms in the possession of hijackers.

Jeremy Glick has become a part of the following 9/11 theories.

Jeremy Glick was one of the Flight 93 passengers who made calls to relatives on 9/11, and as such he's become a part of the controversy over how those calls were made. David Ray Griffin and others say that initial reports said he used a cellphone, but regular calls cannot be made at altitude, so providing evidence that the calls were faked or didn't come from Flight 93. They then point to the Moussaoui trial evidence that says Glick called on an airfone and say the FBI have changed their story.

[Passenger Jeremy] Glick's cell phone call from Flight 93 and others like it provide the most dramatic accounts so far of events aboard the four hijacked aircraft during the terrifying hours of Tuesday morning, and the offer clues about how the hijackings occurred.
Washington Post, September 13 2001

There are at least two problems with this theory.

The first is that Griffin relies entirely on the media report being correct, and there's no guarantee of that. Here's a Post Gazette graphic that incorrectly shows Todd Beamer making a cell phone call, for instance: 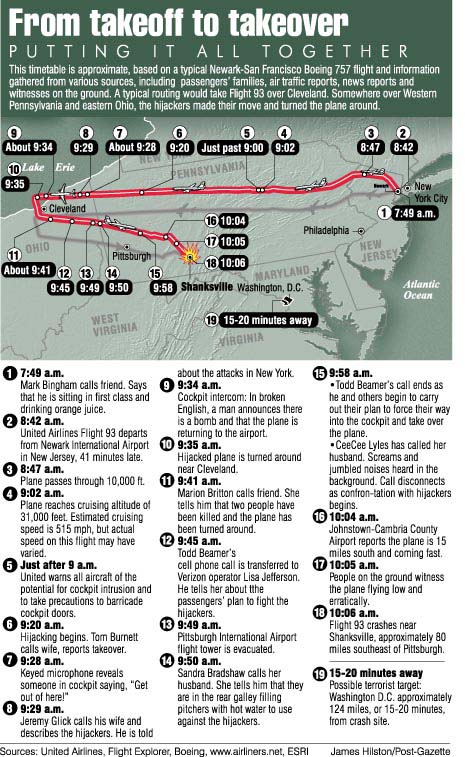 No-one (to our knowledge) disputes that Beamer called on an airfone, so this shows that mistakes can be made.

The second problem is that Dr Griffin presents his quote as though it somehow represents all media reports, and that isn't the case. We found a report on the very same day as his that says Glick used an airfone:

...Passenger Jeremy Glick, 31, of West Milford, N.J., called his wife from the airphone to say they had been hijacked by three knife-wielding Arabs in red headbands...
Daily News (New York), September 13, 2001, Thursday

Later Glick's wife wrote a book of her own, Your Father's Voice, confirming this on page 192: "he said he was calling me on the seat-back phone, not his cell".

Dr Griffin offers no evidence to show his report is correct, then. He fails to point out that at least one other media account contradicts the one he offers, and that this is backed up by Glick's wife. And therefore the FBI evidence at the Moussaoui trial repeats claims that have been made within days of the attack, and in no sense represents a change of story.

In the book "Among the Heroes" Jere Longman reports Lyz Glick telling Jeremy that one of the towers had just fallen. Reportedly he then went on to take a vote amongst other passengers about trying to regain control of the plane. The south tower collapsed at 9:59, so this places the Flight 93 passenger revolt later, yet the 9/11 Commission Report said it began at 9:57. David Ray Griffin and others have used this to support the idea that either Flight 93 actually crashed at 10:06, or it didn't crash near Shanksville at all and the calls were faked.

Lyz Glick gives another account of events in her own book, Your Father's Voice:

Just then, we saw something about a plane crashing into the Pentagon, and I thought, thank god it's not Jeremy's plane.

I told your daddy about this new attack.

The Pentagon was probably the jolt that made Jer see quite clearly that his fate and that of his fellow passengers in the rear of the plane were completely in their own hands. The alternative was to site and wait for the flying bomb they were riding to be detonated.

"Okay, I'm going to take a vote," Jer said. "There's three other guys as big as me and we're thinking of attacking the guy with the bomb"...

"I know I could take the guy with the bomb. Do you think it really is a bomb?"

"I don't think so. I think they're bluffing you."

The whole time, I never heard anything come out of the other end of the phone except your daddy's voice, which was clear as a bell, like he was in the next room. I had no sense of what was happening in the background. There must have been a moment when he polled the "three other guys as big as me," but if he told me about it, it didn't stick in my memory. One of the twin towers collapsed somewhere during this interval, but I don't recall mentioning it or even knowing about it.

Now the vote is inspired by news of the Pentagon, not the collapse of the south tower. Because Lyz Glick said "one of the twin towers collapsed somewhere during this interval" it could be argued that she's still saying the revolt began after the collapse, but let's be realistic here. She also says she doesn't even recall knowing about it at the time, so this isn't a recollection "as it happened", it's something she's tried to figure out later. The fact that there are contradictions in Lyz Glick's accounts, and she admits they're fuzzy - quite understandable given the traumatic nightmare she was going through - shows that we can't use them to deliver some rock-solid, clearly defined timeline. They're simply not that reliable.