In 2004 a video was released allegedly showing the Flight 77 hijackers passing through security at Dulles International Airport. Here's an example of how it was used by the Chicago Tribune. 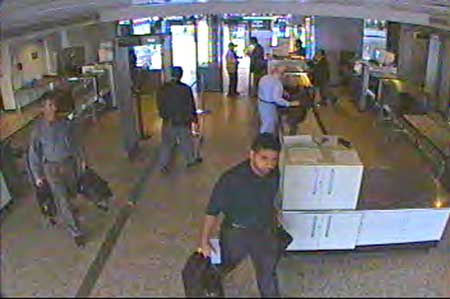 Hijacker Hani Hanjour, center foreground, believed to have piloted American Airlines Flight 77 when it crashed into the Pentagon on Sept. 11, 2001, is shown on surveillance video passing through the security checkpoint at Dulles International Airport Sept. 11, 2001 in this image taken from a surveillance vidoe and obtained by the Associated Press. Hanjour sent two carry-on bags through the X-ray machine and passed through a metal detector without alarm. (Associated Press) Jul 21, 2004

It seemed a very simple story of little real import at all, until a 9/11 researcher noticed something. The man captioned as Hanjour in the picture bore very little resemblance to the much smaller, thinner man shown in other FBI shots.

It certainly looks like a different man to us, and some have drawn big conclusions from the discrepancy.

While much has been made of the fact that the video is not time stamped, there seems to be a more obvious question looming in the video, and I barely see it mentioned anywhere: is that really Hani Hanjour, the alleged pilot?

This would be a good point to do a Google Image search of Hani Hanjour. In addition to Hanjour's FBI photo, you will also find a snapshot of him (alongside Majed Moqed) taken from an ATM camera on 9/5/01. A clear image of Hanjour's appearance emerges: he's thin, high forehead, bony face, etc.

Now the Dulles video snapshot, and the man credited by the AP and others as Hanjour. This man, dressed in dark blue, is *clearly* not the same person seen in the FBI photo or the ATM picture, taken just six days earlier. It's not even close. This is a mix-up on the order of the "Oswald in Mexico City" pictures. The Dulles "Hanjour" is heavier, with a completely different face and hairline.

So taking for granted that 77 hit the Pentagon, this is startling visual evidence in my view that our government has no idea who was flying the plane, or if they do, they don't care to say. A juxtaposition of these two photos, the ATM Hanjour and the Dulles "Hanjour," would look good plastered across the top of your website.

There's a hidden assumption in this line of thinking, of course, that the Associated Press story correctly identifies Hanjour in the video. It's an appealing view to many, which is why, having discovered the apparent "anomaly", they investigate it no further. But actually it's also incorrect. We found a story on the MSNBC site that points to an entirely different individual as Hanjour, and while it's too low a resolution to be conclusive, does appear to be a match, with slighter build and receding hairline (white shirt, walking to the right): 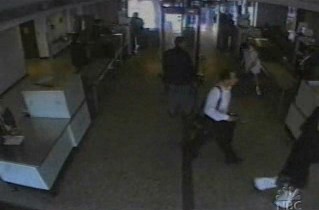 There is a very marginally better image available from the full-resolution video as released at the Moussaoui trial, as you can see here. 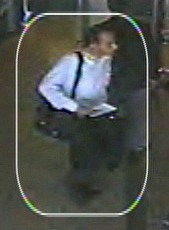 The full video is available for download here, but beware, it's 516 MB in size.

The obvious conclusion here is that Hanjour was incorrectly identified in the first photograph. We've no idea how that happened, but as we've shown, there is another report naming a different passenger who does appear to match Hanjour's description. And so the idea that the Dulles video shows Hanjour didn’t get on the flight is clearly incorrect.